A concise definition provided by Vietnam Cast Iron will help you get first imagination about what does counterweight means as well as what does it do.

By meaning, a counterweight is an object helping to maintain the stability and balance of a mechanical system. Purposely, it plays the role to make lifting the load efficiently leading to save the energy and reduce pressure on the lifting machines.

How does Counterweight works?

Counterweights help to counterbalance a load when doing lifting or lowering. In order to work efficiently, a counterweight of mass has to be suitable as needed and being placed at an optimum distance from the center support (tipping point as well-known). 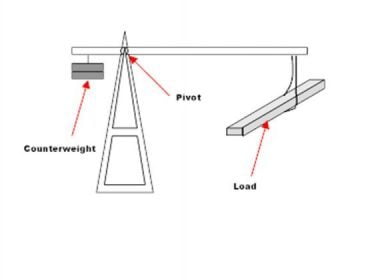 Simply, counterbalance mass is multiplied by the distance from the counterweight to the tipping point. In physics, this is called the moment.

For the most efficient running, the moment of the counterbalance must be equal to the load moment.

This point is very important because it is to avoid overbalancing on either side. If the moment of one side is larger than the other, the smaller side will be collapsed as a result.

The counterweight has a range of applications in construction and machinery industries such as elevators (lifts), cranes, excavators, forklifts, tractors, etc.

Trebuchet or Trebucket is a type catapult. The very first counter weight usage was trebuchet in the medieval period.

At that time, Trebuchet was a siege engine used to throw projectiles (usually weight 50 to 100 kg) into enemy basements from a distance. It was the most popular and powerful weapon in the Middles Ages until the gunpowder invention.

Without the counterbalance, the beam could not complete the arc that allows the sling to accurately release the projectile.

The cast iron counterweight is an essential part of elevator system design. Ideally, the weight of a counterbalance is equal to the weight of the lift car plus 40 to 50 % of its rated capacity.

Regarding its function, cast iron counterweight does counterbalance a load of lift carriage (lift car), save energy, and keep safe for the lifting system.

Normally, the motor needs so much force to move the car. However, when applying the counterweight system in the elevator, it is very much easier for the motor either up or down the car.

In addition, because the motor requires a lot of power to move the car, therefore, the counter weight system works to save the energy needed by the motor.

Consequently, less energy used leads to less energy consumption. Then the running cost and maintenance are reduced as a result.

Crane (or Tower cranes) are commonly used at major construction sites to raise loads up to 120 tons.

A tower crane consists of a central tower with two arms holding a fixed and a mobile counter weight. The operator moves the mobile counterweight to balance the load.

Excavator is a heavy construction machine often used to dig out foundations, trenches, and holes.

The heavy-duty design of excavators needs counterweights to counterbalance the excavated earth. Without it, the vehicle can tip over.

What are counterweights made of?

The counterweight material varies for different purposes. Manufacturers can use either full metal, full concrete, or a mix between concrete and metal to produce counterweight. Cast iron, ductile iron, and steel are commonly used metals.

For example, heavy-duty machines such as excavators and cranes often require both metal and concrete mixture for counterbalance. While forklift counterweights often use metals to maximize space utilization.

Advantage of Cast Metal Counterweight comparing to Concrete one?

Although concrete counterweights are cheaper than cast metal products, it is wiser to choose cast metal for the following reasons.

Concerning product cost, although the concrete material is cheaper than cast metal, on average the cost per product of concrete is also high. This is because to maintain the density, the concrete mixture needs to add more additional components such as limonite, hematite, magnetite, scrap, a metal bit. So the production cost increases many times.

Counterweight mass is various depending on its applications. A single counterbalance can weight from 1 kg to 50 tons.

Green sand casting is the most popular and commonly used to cast metal counter weight products.

In green sand casting, mold is formed by green sand. Unlike shell molding and no-bake casting which sand is bonded by using heats or chemical compounds, green sand for metal casting is unique by bonding sand naturally, mostly due to the presence of clay agents. 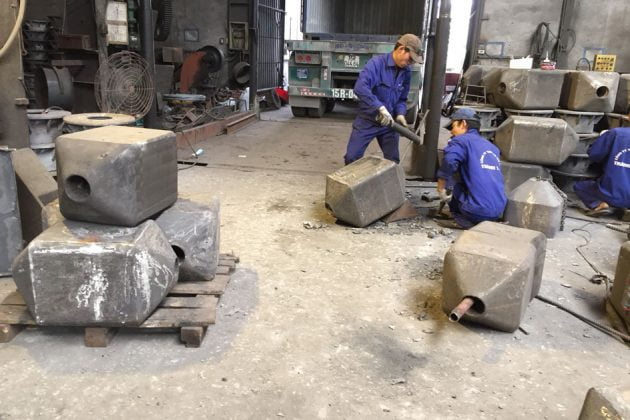 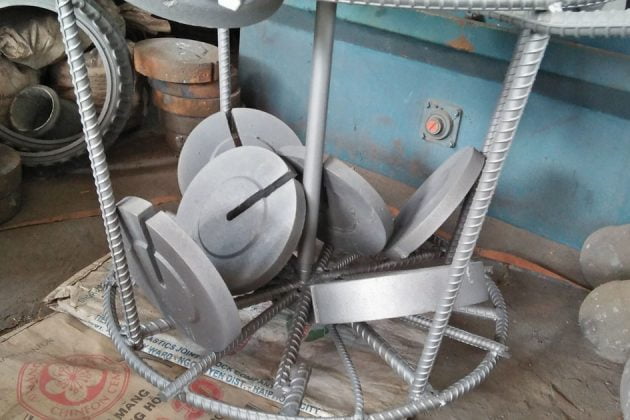 Green sand casting method maintains some excellent advantages suitable for cast counterweight such as affordable and reasonable cost, versatility with production, flexibility in the choice of molds and patterns, and friendly with the environment.

How to choose counterweight suitable for your purposes?

So far, you already get basic knowledge relating to counter weight from its functions to applications. You may wonder how much mass counterweight does I need or which material should use for a counterweight. Don’t worry, our technical expert will guide you clearly.

Before decide to buy a counterweight, it is important to figure out which type of counterbalance do you need. For different purposes, counter weight comes various in sizes and materials.

With respect to agricultural machines, ductile iron and steel are advantageous. Due to mechanical and movable properties, these heavy-duty machines require toughness counterweights. Therefore, cast iron is not recommended in this application because of its brittle property.

Regarding counter weight mass, it is also vary depending on each application.

At VIC, we are able to produce any weight of counterbalance for various applications. From counter weights for building constructions, agricultural machines, to marine industries, we have all the cast metal solutions to meet your demands.

An order with Vietnam Cast Iron will save you money upfront and long term. Call us today to find out how we can make your project exceptional.